Drone Rules, and Why They’re Important 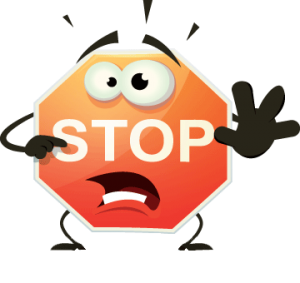 Imagine a society where only some drivers needed to have licenses, and those without licenses could choose whether or not to obey the rules of traffic.

I’ll give you a second to let that sink in.

Can you picture it?

You’re sitting at a stop light, waiting your turn, when a car from behind you cuts over onto the median and passes everyone stopped, ignores the cross traffic and drives right through the red light.

The defense might be, “Hey, I looked. I didn’t see anyone, and there was no cop around. I didn’t hit anyone, so who’s it hurt?”

It sounds like a pretty crazy scenario, doesn’t it? How could a society operate with that kind of chaos?

Now think about drones. How many drone operators do you know who have gone to the trouble to learn the rules, follow them and – one step further – become certified by the FAA to be a safe commercial pilot?

Granted, it’s not quite as dramatic as the scenario I opened with, but flying a drone without learning and following the rules – regardless of your intention to get certified or fly commercially – is at best irresponsible and at worst dangerous and possibly deadly.

In October of this year, the Senate passed, and President Trump signed into law, the FAA Reauthorization Act of 2018. It provides increased funding for the FAA for the next five years, and I can’t help but think that will help the organization figure out a way to more strictly enforce drone laws in the United States. I read a summary of the Act at https://dronedj.com/2018/10/03/senate-faa-reauthorization-act-2018/

Section 374 of this summary begins: “This section directs the FAA to establish a five-year pilot program to utilize available remote detection or identification technologies for safety oversight, including enforcement actions against operators of UAS that are not in compliance with applicable Federal aviation laws, including regulations.”

Section 382 states: “This section amends title 18, U.S. Code, to establish criminal penalties for someone who operates a UAS and knowingly or recklessly interferes with a wildfire suppression, or law enforcement or emergency response effort related to wildfire suppression.”

Section 384 states: “This section amends title 18, U.S. Code, to make it a crime to knowingly or recklessly operate a UAS in a manner that interferes with or disrupts the operation of a manned aircraft or too close to a runway.”

Personally, I wish there was something like a “Part 107 light” training that all drone pilots had to pass in order to fly. It’s not about commercial vs. non-commercial, it’s about flying safely and responsibly. Who knows – maybe something like that’s on the way, too.

Whenever I hear someone say they hate drones, I ask them why. In nearly every instance, it’s due to their having experienced a drone being flown irresponsibly, and in some cases illegally. Some people are frustrated by their lack of recourse when a drone is, for example, invading their privacy or harassing wildlife. My sincere hope is that the FAA figures out a way to work with drone manufacturers to track who is flying where (with our drone, this information is already recorded in DJI’s database), in order to try to curtail these situations. 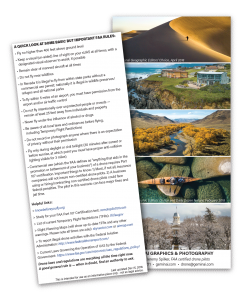 Click on this image to see a larger version.

We carry this printed rack card (you can click on it to see a larger version) with us when we’re flying our drone, to give to people who seem genuinely interested in flying drones and the rules regarding it. I’ve always felt that we (photographers, drone pilots) have a responsibility to educate those curious about what we do, how, and why, and this is an easy and effective way to do it. Given the opportunity, please consider educating people about your profession when they express interest – the world could certainly use a little more understanding, all the way around.

In my opinion there’s no reason anyone should hate drones. They are so powerful, and in the hands of a photographer/videographer, can reveal a perspective on the world rarely seen before. Man has, throughout history, wanted to soar with the birds. This is one of the closest ways (in my opinion) for us to experience that. Please, if you use a drone, learn the very basic rules, for your own good, the good of everyone around you, and the good of the industry, in general.

This entry was posted in Drone, Opinion.